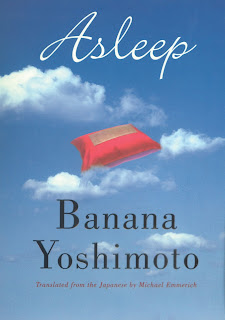 Banana Yoshimoto is a Japanese author who has been on my radar for a while now. Her novel Kitchen is on my TBR and that’s how when I saw this book with her name on it, I decided to give it a try.

First published in 1989, this slim volume of three novellas feature young women who are afflicted by loss and exhausted both in mind and spirit. Longing for something or someone they have lost, they have been “bewitched into a spiritual sleep”, as the blurb proclaims.

The three stories are narrated by young Japanese women, who are seemingly stuck in a temporary literal or psychic sleep as a result of trauma. Each one is in mourning one for her beloved brother's death, another at the end of a painful affair and the titular tale is about a woman deeply involved with a man whose wife is in a coma.

In the first story, ‘Night and Night’s Travellers’ two cousins Shibami and Mari are dealing with the loss of Yoshihiro ( brother to Shibami, lover to Mari) a year after his tragic death. The ghost-like presences they become, especially Mari, is conveyed via the narrator’s deceptively calm and dreamlike sequence of events. The mixing of reality, memory and dream often interweave – forcing us to be dragged along in their attempts to fill the void left behind by his death.

In the second tale, ‘Love Songs’, the narrator Fumi dreams a strange dream which makes her remember an old rival in a love triangle. When she mentions the dream to her boyfriend he tells her this dream is quite common and it indicates someone who was dead was trying to contact her. This leads her to investigate further about her old rival. It turns out that she was indeed dead, and Fumi sets out to get in touch with her. Sleep and dreams indicate an in-between state that could be used as a space for the mingling of reality and the supernatural. The way these two intermingle will leave us believing in the reality of the characters and also the supernatural presence of spirits who wait to communicate in the pauses we all take in our lives daily.

In the last tale, titled ‘Asleep’, Terako, who is involved in a romantic affair with a married man whose wife is in a coma, finds that she can’t seem to stay awake. She is also mourning the death of her friend Shiori who had taken her own life.  In each of the stories, the dead seem to exert so much of a hold on the ones who are alive that a sadness overpowers their existence. But, as they each learn to live with the darkness and the absence, the instability of ‘now’ and the transitory aspect of life becomes all the more striking.

At the core of each of the novellas is a bond between two female characters, and in each tale this relationship is realized to be the key to the understanding of their existence. The themes of depression does strike one as a very obvious one, but it is conveyed in a surrealistic atmosphere described by the calm and cool narrators that we are left with an optimistic feeling for the future of the characters than an overwhelmingly sad one.

I would definitely be picking up more of her writing.  Highly recommended!

Oh gosh, these sound beautiful <3 especially the third one (Asleep). What a great pick! Well done! :)

@Sheree It was a most lucky find for me at my local bookstore. I am now wanting to read more by this author :) Thank you for your kind comment Sheree!

Posts of the Blog Past

A professional bibliophile with more books than bookshelves – that’s me! This blog is to keep track of my adventures in reading and to share noteworthy ideas inspired by the the books I read.